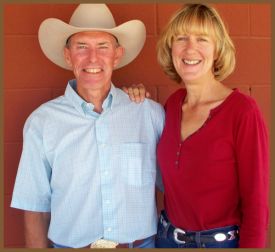 Amy Hollingsworth and Craig Brown started their lives together in Big Bear, California, meeting in 1996 over their mutual love of horses. Since then, they have been a great team, still benefiting from their love of horses and the western lifestyle. Amy and Craig lived in Big Bear for almost 8 years, and then made the move to Apple Valley, California in 2004, buying their first ranch home so that they could have their horses right outside their back door.

Amy has spent many years researching equine nutrition, while Craig has been a farrier since 1997. Prior to going to horseshoeing school, Craig was the training coordinator at Mammoth Mountain Ski Resort for almost thirteen years. It was his love of a horse named Sierra, whom he still owns today, that led him to the Oklahoma Shoeing School. Many years and constant research have resulted in Craig becoming a sought after Farrier in the Big Bear and High Desert areas of Southern California. In this pursuit of always learning new ideas and methods, and following the Natural Horsemanship way of life, Craig started making his own line of rope halters, hackamores, and lead lines.

Amy has spent a considerable amount of time looking into hay growers and brokers, trying to find the best possible source of quality hay for horses in the High Desert. This was after years of frustration with local growers and dealers that had poor quality hay products, that were both expensive and of poor quality. After finally meeting the right one in the fertile area of Southern California, a Hay Co-op was started from their home.

Your cart is empty.